Lauren Glassberg visits Empanadas Cafe to find that our empanadas are “easy to make, easy to eat and fun all the way around.” Featuring the recipe for our famous Pesto empanada.

“Life is like a box of empanadas – you never know what you’re gonna get!”
Chef Luz Helena Bermudez and Patricia Bernard pay a visit to My9 anchors covering the Hispanic Heritage Day Parade.

Featuring some of the best Latin treats in New York – “Empanadas for breakfast, empanadas for lunch, for dinner and as a snack.”

Telemundo pays a visit to Empanadas Cafe for this clip on the popular and internationally aired “Al Rojo Vivo”. 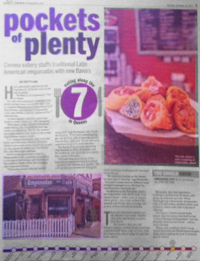 POCKETS OF PLENTY:
EATING ALONG THE 7

Ham, pineapple and cheese are ingredients we’re all used to seeing on pizza.

Stuffed in an empanada? Not so much.

Yet, the nontraditional combo is what draws people from across the city — not to mention Westchester, Long Island and New Jersey − to Corona’s Empanadas Cafe, just off the 111th St. station of the 7 subway line.

As one regular customer put it, the fried-to-order treats are “life-changing.” 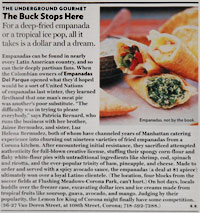 “For a deep-fried empanada or a tropical ice pop, all it takes is a dollar and a dream.”

Empanadas can be found in nearly every Latin American country, and so can their deeply partisan fans. When the Colombian owners of Empanadas Del Parque opened what they’d hoped would be a sort of United Nations of empanadas last winter, they learned firsthand that one man’s meat pie was another’s poor substitute. “The difficulty was in trying to please everybody,” says Patricia Bernard, who runs the business with her brother, Jaime Bermudez, and sister, Luz Helena Bermudez, both of whom have channeled years of Manhattan catering experience into churning out nineteen varieties of fried empanadas from a Corona kitchen. After encountering initial resistance, they sacrificed attempted authenticity for full-blown creative license, stuffing their spongy corn-flour and flaky white-flour pies with untraditional ingredients like shrimp, cod, spinach and ricotta, and the ever-popular trinity of ham, pineapple, and cheese. Made to order and served with a spicy avocado sauce, the empanadas (a deal at $1 apiece) ultimately won over a loyal Latino clientele. (The location, four blocks from the soccer fields at Flushing Meadows-Corona Park, can’t hurt.) On hot days, locals huddle over the freezer case, excavating dollar ices and ice creams made from tropical fruits like soursop, guava, avocado, and mango. Judging by their popularity, the Lemon Ice King of Corona might finally have some competition. 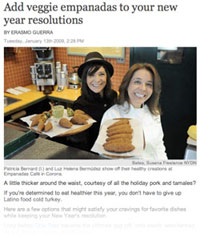 Patricia Bernard and Luz Helena Bermúdez show off their healthy creations at Empanadas Café in Corona.
A little thicker around the waist, courtesy of all the holiday pork and tamales?
If you’re determined to eat healthier this year, you don’t have to give up Latino food cold turkey.
Here are a few options that might satisfy your cravings for favorite dishes while keeping your New Year’s resolution.
Empanadas Café (56-27 Van Doren St., Corona Park, Queens) opened in 2003 and offers 28 varieties of empanadas, including six that are made from organic, whole grain flour.
“The organic menu was developed three years ago and it’s something not available anywhere else,” says Colombian Patricia Bernard, who owns the store with her sister Luz Helena Bermúdez.
With prices starting at $1.75 a bite, you’ll keep your wallet feeling healthy, too.. 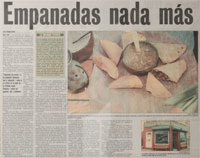 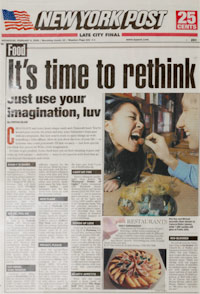 Empanadas del Parque is a year-old spot featuring a dollar menu consisting of yummy empanadas made with 20 different original fillings to satisfy your every craving, from the original beef empanada to the delicious “guava and cheese” dessert. Everything you order is made fresh while you wait. 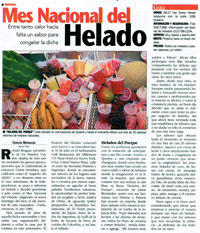 “These empanadas are absolutely delicious…go to Empanadas del Parque Cafe and tell them that Dr. Joy Brown recommended you.”

Send your order through Whatsapp:

Or find us on
Uber Eats

Party trays are special order and must be ordered 24 hours in advance.

Pay for your Party Trays Online via PayPal, Card
or call us for more information